Tents and stuff: the details of the situation at the Verkhovna Rada. Five things you might oversleep 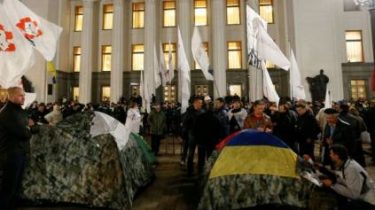 1. MP Oleg Barna compared with the jackals protesters who beat him during a rally near the Parliament on October 17. The MP believes that those who attacked him, “people are paid”, while the real protesters, in his opinion, would not do that. Read more⇒

3. Private residence of the President of Petro Poroshenko in the evening began to vigorously protect. This was reported by MP from “Samopomich” Victoria Wojcicki. On his page in the social network she posted the photo and noted that in Kozin pulled the security forces and military equipment. Read more⇒

4. The tents that the protesters set by the Verkhovna Rada, to wear law enforcement officers will not. This was at the briefing said the chief of the National police of Ukraine Sergey Knyazev wrote in Facebook, the General Prosecutor of Ukraine Yury Lutsenko. Read more⇒

5. The evening of 17 December in Kiev under the Verkhovna Rada renewed clashes between protesters and police. The fight started between the representatives of the battalion “Donbass” and National guard soldiers. The conflict occurred due to the fact that netguarder began to remove the fence mesh, which they had previously established. The fight lasted a few minutes, after which the parties departed. Read more⇒