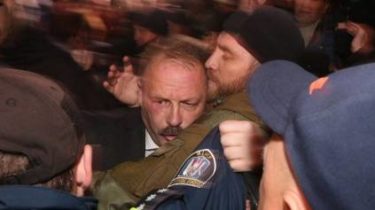 The Pechersky police Department of Kiev carries out pre-trial investigation of the conflictthat took place in Parliament between the protesters and the people’s Deputy from “BPP” Oleg Bar.

About it reports “Ukrainian truth” with reference to a source in law enforcement bodies.

Criminal proceedings were opened on Wednesday, October 18, article 346 of the criminal code of Ukraine “Threat or violence concerning the state or public figure”.

17 October in Kiev on the street Grushevskogo, 5 “unidentified persons caused harm to the health of the people’s Deputy Oleg Barns”, – mark in law enforcement.

Video”did the paid titushki”: Barna commented on the fight under the walls of BP

We will remind, on October 17 near the Verkhovna Rada beat the people’s Deputy from BPP Oleg Barna. The protesters surrounded him and demanded to go to work. To protect people’s Deputy rushed Mikheil Saakashvili, who called on protesters not to use force. Despite that Barna got a few bumps and went through the “corridor of shame”. Subsequently, law enforcement officers helped the Deputy to walk to the hotel “Kiev”.