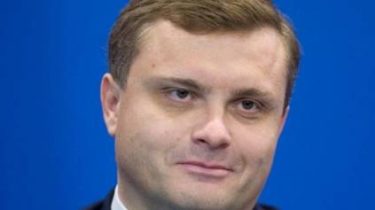 The Ministry of internal Affairs of Ukraine published a scheme of a possible tax evasion and illicit enrichment of MP from the Opposition bloc Serhiy Lyovochkin.

During the investigation, the investigators found that Lyovochkin and controversial oligarch Dmitry Firtash, who controlled the company GDF Media Limited, 2015 transferred $ 100 million in favor of the Russian “First channel”. The amount was payment for imaginary the acquisition of 29% shares of JSC “inter Channel”. Subsequently, the portion of the “inter” was brought to the Cyprus company Oskaro investments limited, 100 % owned by Lyovochkin.

“These circumstances are also confirmed by the fact that Levochkin in his Declaration stated that he is the owner of shares of the company Oskaro investments limited, a total of 20 thousand shares with a nominal value of 130 thousand 480 UAH, that is for a total amount of 2 billion 609 million 600 thousand UAH that is more than 100 million dollars”, – stated in the message of Ministry of internal Affairs. 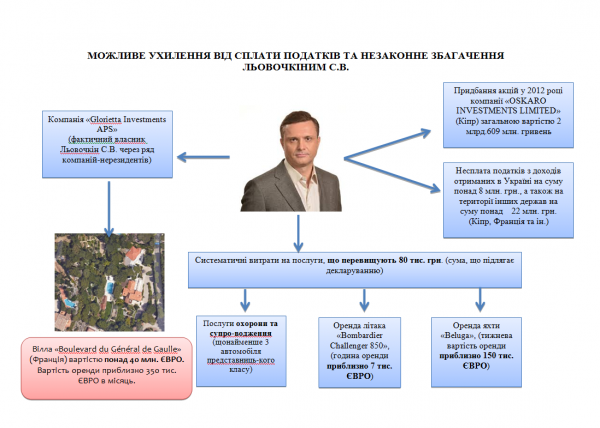 While checking the sources of funds, the police found that from 2010 to 2014 Levochkin held the position of head of the presidential Administration of Ukraine, Viktor Yanukovych, and from 2014-present, people’s Deputy of Ukraine and not involved in business.

Lyovochkin, accused the leadership of the interior Ministry in the preparation of the assassination attempt on him

“That is, currently Levochkin Sergey Vladimirovich has owned shares of the company amounting to more than seven thousand times that of the officially declared income for the last three years,” said the Ministry.

During the investigation information was received that Levochkin using controlled offshore companies legalized a portion of the extracted in the criminal way of cash, by purchasing multiple properties in different countries of the world. Police also investigated other possible episodes of illegal activity of officials of the media group “inter”.

Deputy head of the Main investigation Department of national police police Lieutenant Colonel Dmitry Booth, which deals with the case of osrodkach “apollonovna,” said dirty media against him, controlled by Lyovochkin “inter” and sued.

“I was forced to go to the court with the claim about protection of honor and dignity. According to the law the defendant is the party that disseminates the information, in my case – the TV channel “inter”. I want them to at least said on the basis of which the conclusions that I am a criminal, what am I kidding, engaged in raiding and extortion,” said Booth.

He called on the refute against him in case its authenticity is proved.

As previously reported, for the year 2016 Levochkin declared nearly 8 million hryvnias of income. From “opublikowa” there is an apartment in Kiev (178 sq m) and rents an office (682,6 sq m), he freely enjoyed the house and three plots of land in Kozyn Kyiv region.

The Declaration also States the right to use the dwelling house and the land plot of almost 1 hectare in France and apartments in Greece.