In Kiev, preparing charity ball of the ATO participants and volunteers 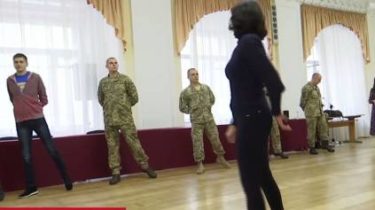 In the capital are prepared first in the history of the war in the East ball of the defenders of Ukraineto raise funds for the opening of the Museum of the ATO in Uman, the main exhibition which will be dedicated to the fallen Hero Andrew the Dogwood. Waltz will be soldiers from the front lines, the volunteers and even journalists, says the story TSN.19:30.

Vadim Sukharev arrived at a rehearsal just with the war – he has great prestige among the military, and now commanded a battalion. Says, be able to dance the waltz – at least a male occupation than a war. “We danced to the waltz of the officer in the centre of the city, still a cadet when I was,” he says. Together with him – the head of Ukraine’s only military radio. “It is an honor for women to dance the waltz with a male officer,” she says.

Volunteer Elena Shevtsova acknowledges that the biggest problem for girls to get dress. “Since fourth year on the dress question was not, determined where to take it. The problem is everyone who dances,” says the woman, accustomed to military camouflage and bulletproof vests.

Collect all heroes in one place was not easy, admits organizer Oksana Gavrilyuk. They all agreed to dance for the memory of Andrei Dogwood. Almost all participants of the ball will dance for the first time. Paratrooper Sergey was the battle for Lugansk airport now says – and louvat once studied for the first time: “on the first day of the war, too, it was not clear, everything was difficult.” Training participants have two days, and the charity ball will be held in the column hall of the KSCA on Friday.