“The Kremlin renamed the place of the skull”: the Network has ridiculed the intention Sobchak to participate in elections 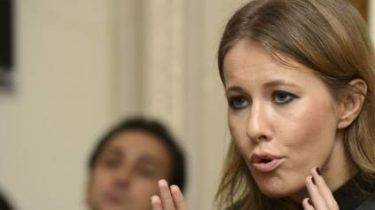 Russian TV presenter Ksenia Sobchak has declared its intention to participate in presidential elections in 2018 and that laugh of his countrymen.

Users of Runet in full joking about participation Sobchak in the elections. In particular, users comment on the numerous spelling mistakes in a letter to the presenter in the “Gazette” where she declares his / her intention. Sobchak also recalled her participation in the reality show “Dom-2”.

And the Russians are laughing at the fact that, in fact, they have no choice. But this is a laughter through tears.

And then you will dream of this: pic.twitter.com/Y8JLZrdnMu

The presidential candidate of the great and Beautiful Russia writes in social networks: https://t.co/XkNiJ0sv79

In the Kremlin promised Ksenia Sobchak in exchange for her pseudoacacia in the elections?

The main question for 2018 now! If Sobchak becomes President, then who will be Prime Minister – Kandelaki or Buzova? pic.twitter.com/tKCtMKo5uB

The candidate we deserve: pic.twitter.com/kLLxjQUjvK

Some in despair, others ask: and whats the big deal? I am also in dismay and confusion, so I will try nevertheless to formulate…

An important question to take Sobchak 0.1% giant 0,9% Yavlinsky in the upcoming elections?

Putin made a knight’s move, having allowed Sobchak to participate in the presidential elections.

Yeltsin appointed a porter to lead the country, why are you surprised by the nomination for the presidential elections of the leading “House-2”

RBC:K. Sobchak bought A. Navalny from prison and invited him to go to the DNR until 2028. pic.twitter.com/II0jXJiPhz

The candidate Against all that K. Sobchak posted a meeting with the head of its election headquarters Cord. pic.twitter.com/LfDQfwfkYs

How you have the nerve to mock the election platform Sobchak? The results shows that people by the slogan “against all” took YEARS pic.twitter.com/ZsKX89qhXn

Putin has allowed Sobchak to fuck up for Russia.https://t.co/JbqeXBy9J3 pic.twitter.com/F3jwTsUn7e

Putin says he first heard about the nomination Sobchak. Sobchak said that Putin was informed about the decision. How they are fed up with your lies pic.twitter.com/DMsDNtCVxm

Sobchak has declared that goes to the polls. Your future: Putin, Sobchak, Zyuganov or Zhirinovsky. CHOOSE! The main thing is not to sleep, but would not sleep

Now we tell you that the nomination Sobchak is good, BECAUSE COMPETITION and if we all come to the polls, Putin will win with 99% and 97%

Sobchak – President. Kirkorov – the Minister. Buzova – MP. Instead of news around the clock twist House-2. So what? https://t.co/0FY2O7xleP

SOBCHAK SHOULD BECOME PRESIDENT BECAUSE WE ALL DESERVE IT!

The Kremlin renamed the place of the skull

I will vote for Sobchak, if on Thursday the Russians will settle in the VIP houses

To publish a letter of nomination, without checking a proofreader is a good start.

Sobchak decided next year to sit with my posse in the summer cafe. pic.twitter.com/FcZg6kGD2k

Protest electorate in the version of presidential administration pic.twitter.com/pos63SEoXY

Protest electorate in the version of presidential administration pic.twitter.com/pos63SEoXY