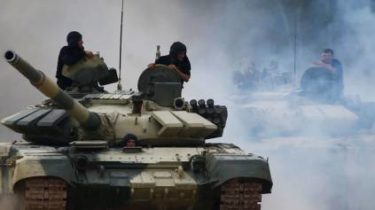 In Novoazovsk the occupants threw a squad of Russian commandos, who fought in Syria. This is reported by Ukrainian intelligence officers, said in the story TSN.19:30.

In addition, several North of the border was crossed by about a dozen enemy tanks. All this gives reason to hope for remission of hostilities and recent developments in the sector of “Mariupol” only confirm this. The invaders are actively using the machine guns, and forbidden heavy weapons – light sometimes not so blatantly, but in the dark neither in what does not deny.

The military, which hold the front line, call themselves good, peaceful and intelligent people. However, when the Marines are getting restless, fiery comfort to the enemy works great. “They realize next time that it is better not to touch us,” says one of the soldiers. This answer is so convincing that the enemy had already forgotten about the infantry attacks to the APU. Perhaps it is for the Russians, and experienced the subversive groups, who have combat experience in Syria, suggesting the Ukrainian soldiers.

As previously reported, during the last day in the seaside area invaders released 4 mines of calibre of 82 mm near Gotovogo. And under granulometry enemy fire hit the Ukrainian strongholds near Shirokino and Pavlopol.