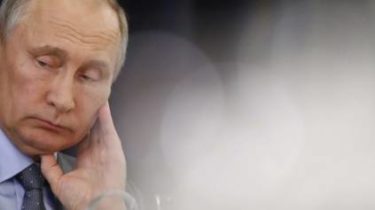 The President of Russia Vladimir Putin declared that will not allow the closure of the border between Russia and the occupied part of Donbass.

The head of the Federation said during a speech at the discussion club “Valdai” in Sochi, reports RIA Novosti.

In his opinion, in the case of the closure of the border there will be a massacre like in Srebrenica (then the Serbs had killed seven thousand Muslims).

“If you give the opportunity to political issues, until the decision on granting to these territories (IDLO) special status in accordance with the law adopted by Parliament and has now been extended for a year, if not to adopt the law on Amnesty, if not to do all this, then the closure of the border between Russia and unrecognized republics will lead to a situation on a par with Srebrenica”, – said Putin.

In Minsk, the Ukrainian side demanded to cancel the decree of Putin about the “passports ORDO”

Earlier, Russian President Vladimir Putin has accused Europe of double standards in the approach to the question of the separation of regions in an independent state. The master of the Kremlin also mentioned Ukraine. “Any conflict should be solved in a civilized way. Russia has always advocated such an approach. Firmly convinced that even the most complex nodes, whether the crisis in Syria or in Libya, the Korean Peninsula, say, or Ukraine – it is necessary to untangle and not cut,” said Putin.