The protest continues: supporters of Saakashvili decided to stay in tents under the Verkhovna Rada 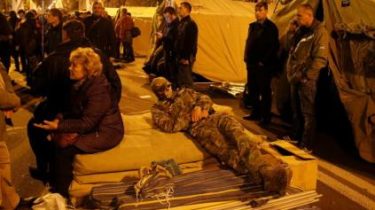 Activists of the “Movement of new forces” of Mikhail Saakashvili decided to continue the protest near the Verkhovna Rada and remain in the camp.

This is stated in the statement of political forces, which received TSN.ia.

All the other protesters will continue to enforce the requirements of the “big political reform” by its own means, said activist Alexander Semenov.

Videomeetings decided to partially suspend the protest at the Verkhovna Rada

One of the organizers of the rally, Mustafa Nayem in Facebook wrote that three of their demands concrete steps have been implemented only one – the removal of inviolability from deputies. Also, according to him, from a dead point has moved the question on changing the electoral law.

However Nayem called a complete failure of the third paragraph – the creation of an anti-corruption court. According to the MP, Ukraine’s President Petro Poroshenko refused to submit to the Parliament a bill.