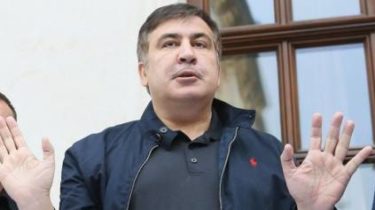 On the website of the President of Ukraine a petition asking to deport the former head of the Odessa regional state administration of Mikheil Saakashvili in Georgia.

The petition appeared on 20 October, its author stated Svetlana Uric.

A woman wants Saakashvili was deported due to “systematic violations of the Laws of Ukraine, illegal border crossings, incite hatred between Ukrainians and calls for the next Parliament to the resignation of the legitimately elected President of Ukraine.”

During the day, the petition received over 1300 signatures of the required 25 thousand.

Recall that Mikheil Saakashvili was deprived of citizenship in late July, when he was outside Ukraine. He is a politician promised to return September 10. He entered the territory of Ukraine through KP “shehyni” that in Lviv region, although I was going to make it through KP “” that in the Lviv region. To the border he got a bus.

At first he tried to cross the border by train intercity “Przemysl – Kyiv”, but he was detained as a “person who does not have grounds for entry into Ukraine“. The state border service of Ukraine announced a breakthrough in the checkpoint “shehyni” massive illegal violations of the state border.

On September 22 the former head of the Odessa regional state administration Mikheil Saakashvili is found guilty of illegally crossing the Ukrainian border. The decision adopted by the court of Mostiska of Lviv region. Saakashvili has to pay a fine of 3400 UAH. In addition, he must pay the court fee, which is 300 UAH.