Protesters near the Parliament issued an ultimatum to the President, and the police detained a man with a gun 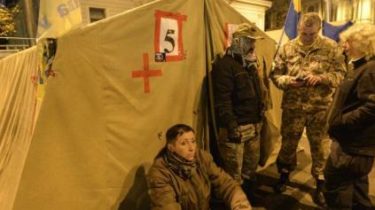 In Kiev, near the Verkhovna Rada detained a man who tried to smuggle a weapon into a tent city.

The young man seized a rifle with a telescopic sight, a pistol, a knife and a walkie-talkie. To explain their actions and provide the permits for the weapons he refused. Behaved provocatively, provoking the police and protesters. Subsequently, the police found the gun man bought a week ago in Odessa. According to the preliminary version, a rifle and a pistol pneumatic. Seized the Arsenal sent for examination. To clarify the circumstances of the incident involved the representatives of the SBU.

Yesterday the government quarter of Kiev became more free to travel. The police pushed the boundaries a little higher on the street. And now you can take Garden and mulberry. But despite calls from the police and the President to release the roadway, near the Parliament, it remains blocked.

To disperse the protesters are not going to. Today they put forward the ultimatum to the President five days to provide to the Parliament two bills of impeachment and the anti-corruption court. At the same time Petro Poroshenko said yesterday that these requirements have long been agreed. And at the latest by the spring will be taken by the Verkhovna Rada. Called “destructive” behavior of the inhabitants of the tents due to the fact that they don’t want to get out.

Earlier it was reported that under the Rada will be two tented camps – military and civilian.