Search of the kidnapped baby in Kiev: how it was 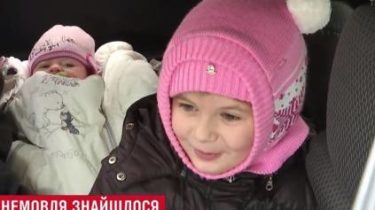 Two hundred law enforcement officers and countless ordinary people of Kiev on Friday evening were looking for two months Victoria, stolen from kindergarten Obolon. The child was found on Saturday living in 20 kilometers from the capital, in the village of Novoselki, says the story TSN.19:30.

Night the girl’s mother Olga, her older sister Anastasia and father slept. Video surveillance kindergarten, which is seen as an unknown woman goes with child, revised dozens of times. Olga asked me to give the kidnappers pleading is to give the child a cure for colic and proper nutrition.

Meanwhile, the police monitor video from surveillance cameras throughout the capital and surrounding area – and in the end the pharmacy directory I saw the same woman and child. Soon the police have established the identity of the suspect and her accomplice – both 20 years old. In a matter of hours both arrestedand the infant found in a trailer at the sawmill, where the spouse of the kidnapper worked as a watchman. Investigating the kidnapper said that a month ago her own daughter had died, and the body of the baby she threw in the trash. The guilt of the accomplice and the mental state of kidnappers investigation is yet to be established.

The Network has published a video of the suspect in the kidnapping of the baby: “I Wanted to take it to the police”

“O my Lord! I will never let go” – happy first photo of his baby Mama. She met the baby at the hospital where the child was examined by physicians. Mrs. Olga says that fatigue, nerves and time are intertwined in a continuous unreal world. “I do not believe this was happening to me,” she says. The father could not hide his happiness and gratitude to the police, who quickly tracked down and returned the child. Mum and thanked the kidnappers for the fact that the wick intact. “Thank you, thief, that you were a normal human being – fed, dressed, changed diapers. Thanks, that brought back a live baby,” says she. Now the family will celebrate two dates: August 29 – birthday of the Wiki, and October 21 – the day of her return to the family.