Warm shelters and restaurant food: it is waiting for Kiev homeless during cold weather 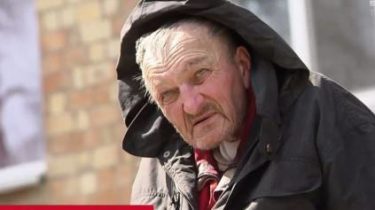 Along with the cold and the beginning of this autumn starts a tough season and for the homeless. Them in the capital and its suburbs there are about ten thousand, according to a story TSN.19:30.

32-year-old Roman lives under the acacia tree at the cave, but the blanket on which the man slept, removed from the Park workers of Zelenstroi. Now homeless is planning to spend the night at the station, but there too, life is not sweet. Thence frequenter Anatoly laments the reduction of places in the waiting rooms and to prevent people without tickets in the room. But homeless people being kicked out of the temple in the Alexander hospital – there for a free lunch come every day to five hundred people. “We don’t turn anyone away,” says the nun Febronia.

33-year-old Maxim is eating pasta with sausage and delitsia recipe, how to survive in the cold – the main thing that was warm clothes and shoes. Also find a warm shelter can be the social care center in Suzdal 46. It is designed for 150 seats, a clean bed homeless can receive UAH 10 per day. To close the question of the night for all the homeless, we need many more such institutions, because only zarechany homeless people in the capital five thousand. “From my point of view, twice that many. Some 10% want to work and improve their lives,” admits the Deputy Director of the centre for homeless Yaroslav Kolomiyets. The most difficult in the capital of Donbass and the Crimean crystal to restore their documents difficult in the city, they can get stuck for a very long time.

Food for the poor in the restaurant in the center with an open kitchen – chicken with vegetables and wheat. Cook claims that his meals warm and in the dead of winter. Dinner in a thermos for taking his car through the dark streets to a shelter to 47 people. People there take subject to passing a medical examination and fluoroscopy.