How much money passes by the budget due to the lack of police cameras on the roads. Experiment TSN 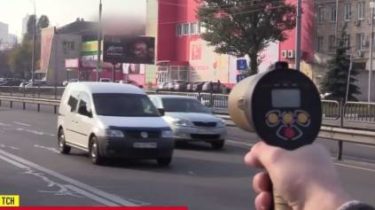 The Ukrainians once again in recent years, has promised to introduce video recording violations on the roads – the results of resonance that caused the accident in the Kharkiv. Meanwhile, journalists asked, how money “flies” by the Ukrainian budget for lack of adequate reaction of law enforcement officers on the roads, says the story TSN.19:30.

Each of the experiments lasted exactly 15 minutes. First, the reporter with the radar speed measurement left on one of the busiest Metropolitan streets. It turned out that during this period of time, violations that are punishable by fine, a travel around the city with a speed of 80 km/h and above, passed 19 cars, and one of them had the speedometer figure 115 – that is, he would have written double the fine.

The next step was the observation of the behavior of drivers at the traffic lights on the other street – there are no violations in 15 minutes is also not done. And some of them were made just before the car of the patrol police, but law enforcement all of these cases ignored. The drivers drove for the yellow and red light, was developed through the double continuous strip, but pedestrians crossed the road at a signal prohibiting it to do.

“The culprit of road accident in the Kharkiv repeatedly violated traffic regulations”: the MP has published a list of violations Zaitseva

In the spotlight another experience was the lane for public transport. To monitor it specifically chose not rush hour, and in the daytime, when the cars on the road is not so much the other three strips in the same direction freer to go there without any obstacles. However, drivers regularly swept and forbidden for cars territory – in the eyes of journalists it has happened 16 times in a quarter of an hour.

Money considered in accordance with the size of the fines. It turned out that only 45 minutes of observation in three different places the drivers broke the rules for a total amount of 20.7 thousand.