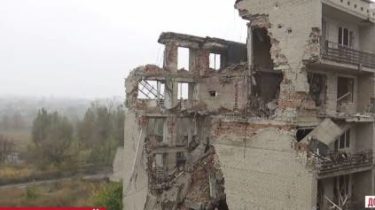 Gunmen open fire on Ukrainian military near the occupied Donetsk. Sometimes the goal of the invaders is simply to scare the soldiers, and sometimes shoot very precisely, says the story TSN.19:30.

In addition to the enemy, a new problem of soldiers becoming weather – due to the low temperature for the first time this fall froze the water. Soldiers say that to keep the front and hard in the middle of the field, but much more dangerous to do it in the urban landscape, where visibility is very limited, and near Marinka such territory. Of the many ambushes snipers of the enemy. “And this is not the ordinary miners are trained people. The 12.7 was and “Screw” the 308-th,” – says one of the employees of the APU.

Specificity adds the presence of the village with civilians. Local residents have repeatedly witnessed the arrival of heavy shells, which had left the ruins, a huge hole in the ground and walls. The military said that life has taught people here to distinguish who is who in this war, so among the residents of Marinka, becoming increasingly common Pro-Ukrainian Patriotic views.

As reported, on Sunday, October 21, the militants of illegal armed formations in the Donbass five times violated the ceasefire in the ATO area. One Ukrainian soldier was wounded.