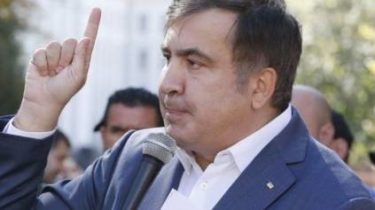 There are no circumstances that would exclude the possibility of the deportation of the ex-President of Georgia, Chairman of the party “new force” of Mikheil Saakashvili.

This was stated by Prosecutor General Yury Lutsenko during a briefing in the break of the meeting of the regional development Council, UNIAN reports.

The interests of national security: the security service has banned an ally of Saakashvili from entering Ukraine for three years

“We have news. If I had said that Saakashvili has a status that eliminates any way for his deportation or extradition, now the State migration service refused to grant him refugee status, about which he wrote a statement, and Mr. Saakashvili, as always, to the court of appeal against this decision is not appealed. Consequently, he is now a stateless person without any special circumstances that could prevent deportation or extradition, and the State migration service knows it exactly,” he said.

Recall that Saakashvili was deprived of citizenship in late July, when he was outside Ukraine. He is a politician went back on September 10. He entered the territory of Ukraine through KP “shehyni”that in Lviv region, although I was going to make it through KP “Krakovets”. To the border he got a bus and crossed it illegally, together with 60 persons. Some of them have used force against the guards. The court found the politician guilty of illegally crossing the Ukrainian border and ordered to pay 3400 hryvnias of a penalty plus court fee 300 UAH.