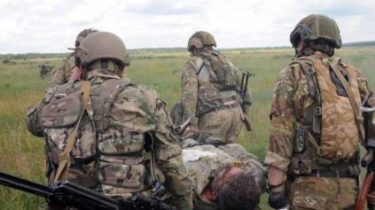 The situation in the area of ATO in the future remains tense: the enemy did not stop shelling positions of Ukrainian army in Donetsk and seaside areas, single using mortars.

#Topad #Foresnic #Donbas #spokesperson #statement the CONSTRUCTION of the PRESS CENTER of STAFF ATO AS AT 18.00 on 25 OCTOBER 2017…

Published by the Press center of staff ATO 25 Oct 2017

In the first half of the day, the militants fired heavy machine guns at Oboronna Gotovogo and Lebedinsky. And mortars of caliber of 82 mm was applied to the Water.

In the direction of Donetsk under fire from enemy rocket-propelled grenades have been the strengthening of anti-terrorist operation forces near the Sands. Unrest was on the outskirts of Avdeevka. Here, the enemy shelled fortifications of the Ukrainian army of machine guns and small arms.

The Ukrainian military responded harshly to the enemy from the infantry weapons. As a result of the confrontation wounded one Ukrainian soldier.

“Almost all armed provocations, the ATO forces responded with fire, and harshly suppressed the activity of the militants”, – stated in the message the press center of staff ATO.

Earlier on briefing the UN on the humanitarian situation, the Ambassador of Ukraine Volodymyr Yelchenko said that at least 1.6 million Ukrainian citizens were displaced in 2014, more than 3.8 million people in need of humanitarian assistance due to Russian military aggression and occupation.