“They are free people.” Dzhemilev told the details of the release and Chiygoza Umerov 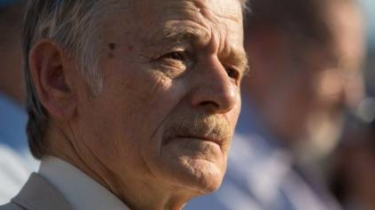 The procedure of liberation of the representatives of the Mejlis of the Crimean Tatar people of Akhtem chigusa, and Ilmi Umerov, convicted by Russia in the occupied Crimea began in the morning of Wednesday, October 25.

About it Dnia said the leader of the Crimean Tatar people, MP Mustafa Cemil.

“About 10 o’clock the lawyer Polozov called and said Akhtem chigusa and Ilmi Umerov brought to the airport. It seems that there was scheduled signing of the Protocol between Turkey and the Russian side on the transfer of our political prisoners in the Turkish side. Supposedly there sat a Turkish military plane that was supposed to pick them up,” – said Dzhemilev.

However, this aircraft, said the people’s Deputy, no one actually have not seen.

“We later received information that the Russian plane took them to Anapa (city in the Krasnodar region of the Russian Federation – ed.). It makes us a little alarmed, but then after about an hour and a half we received information that the plane from Anapa already sent to Turkey. Later said that in Ankara. About an hour ago from Ankara reported that they were met by Turkish diplomats and was taken for medical examination”, – said the leader of the Crimean Tatar people.

He also added that a few weeks ago, about 11 October, Akhtem Chigos came two generals of the FSB, who arrived from Moscow.

“They said, according to the agreement between Erdogan and Putin, they will be released, but they need to write a statement about the opinion of their complaints on appeal, and to write the application on pardon. It Ahtem Chiygoz said that he is a citizen of Ukraine, its President Pyotr Poroshenko, not Putin, so it may not appeal to him and especially about something to ask him, because no mercy from the Russians he doesn’t want. And the withdrawal of the appeal, the lawyer wrote the letter that in Russia there is no justice does not exist, the consideration of his appeal makes no sense, so he withdraws. Umerov said the same thing,” – said Dzhemilev.

Also then employees of FSB have informed that already there is an order, which said about the release of Akhtem chigusa, and Ilmi Umerov for humanitarian reasons. “Although, what could be Putin’s humanitarian motives”, – Dzhemilev noted and added that for a long time, signing Putin was not.

“Today, probably, this signature is already on, and have such result”, – added the MP.

He stressed that Chiygoz and umer now free people themselves will decide whether to go to Ukraine. “Now they have to deliver will not. Now they pass medical examination, and then will decide. They are free people,” – said Dzhemilev.

We will remind, representatives of the Majlis of the Crimean Tatar people Akhtem chigusa and Ilmi Umerov, previously convicted in the occupied Crimea, 25 October gave the Turkish side. This became possible thanks to negotiations of the President of Petro Poroshenko with President of Turkey Recep Erdogan, who in turn negotiated with Putin.