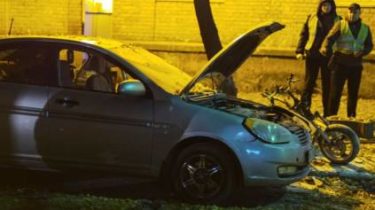 Who is behind the explosion in Kiev, which occurred a day ago and broke two of human life and people’s Deputy Ihor Mosiychuk, the political analyst Vitaly Bala and bystanders were sent to hospital with serious injuries? Motives and versions during the day after the attack, voiced very different, according to a story TSN.19:30.

In capital Prosecutor’s office are not sure that the purpose of criminals was precisely Mosiychuk. Now, however, one of the main versions – the attack on him by Russian security services. Talked about this and the MP, and talk politics around him, because destabilization of the situation now can be beneficial to the aggressor to disrupt the situation in the country. However, criminologists such version am doubtful because many signs point to artisanal manufacture of explosives.

Videogenie version of the attempt on the life of MP Mosiychuk

The second after the Kremlin suspect is Chechen leader Ramzan Kadyrov. Adviser to the head of the Ukrainian interior Ministry Zoryan Shkiryak remembered how a few years ago he threatened to kill the Chairman. Assistant Deputy Amina Okueva with her husband – also among those with whom Kadyrov’s men tried to settle the score. They believe that the handwriting of act of terrorism can be an argument in this suspicion. “This hybrid war, and this situation could be repeated in any city,” – said Okueva.

Experts say that the probability that hunted just for Mosiychuk, more other versions. However, the reasons for this attention I do not presume to speak even the closest colleagues of the MP. Oleg Lyashko does not exclude political opponents, in particular due to the active participation of the Chairman in the investigation of transactions Levochkin. Some media speculated that the attack could be a result of the struggle for the so-called “house mother“, through which there was a skirmish between soldiers of the battalions “One” and “OUN”, and the leader of the latest Nikolay Kohanivsky Mosiychuk recently strongly defended in court, and even wanted to bail.

“Ukraine has swept Russophobia”. The Kremlin reacted to the version of the investigation about the assassination of the Chairman

Among other versions are in the business of dismantling. Supposedly the company “Lubnygaz” Mosiychuk accused in an attempt of raider capture of the enterprise. In addition, he said said earlier about the attempted attack by the so-called “forest mafia”, with whom he had disputes.