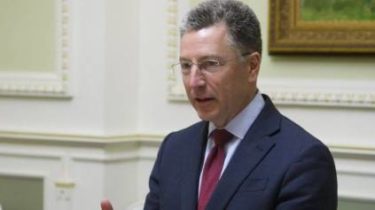 Until the end of 2017 can be developed by resolution of the Security Council of the UN peacekeeping mission in the Donbas.

About this at the meeting of parliamentarians with the special representative of the US State Department on Ukraine with Kurt Volker said the MP from the faction “Block of Petro Poroshenko” Vladimir Aryev.

Abstracts in the resolution prepares himself Walker.

According to Volcker, “the blue helmets have to control the entire territory, including the border and have access to the locations of the heavy equipment.”

Reintegration of Donbass: as a strategy Volker to win the Kremlin’s strategy

Also the representative of the United States believes that Russia is not like the law on the reintegration of Donbass, which Moscow called an aggressor, and “Ukraine is the only party of all, which shows commitment to the implementation of the Minsk agreements. How could anyone to these agreements are not treated, this is the only process that recognizes the Russian Federation, which gives the opportunity to avoid escalation”.

Kurt Volker told the MPs that is now “the impression is that Putin changed the approach from a purely military and now tries to get friendly to him, the Ukrainian leadership (is current). He also believes that “Obama was wrong in the matter of non-lethal weapons to Ukraine and has listed at least three factors which indicate that to provide weapons. However, it is a political issue, and he is a diplomat.”