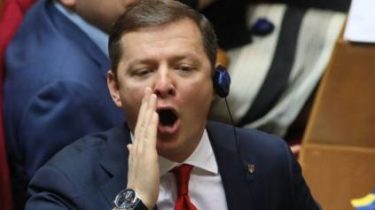 National anti-corruption Bureau to check the information about the lottery winnings of more than half a million hryvnia, which has received the leader of Radical party Oleg Lyashko.

This was stated by Director of the NABU Sytnyk.

“We check it (the Declaration of Oleg Lyashko 571 thousand UAH winnings national lottery – Ed.)” he said in an interview to “5 channel”.

One in 10 million: a mathematician has calculated the odds of the lottery after the Ukrainians “win” Lyashko

We will remind, earlier Lyashko added in its Declaration, information about obtaining over half a million hryvnia. Policies three times won the lottery “Ukrainian national lottery”. The amount of winnings is 571 45 thousand UAH.

Subsequently, a radical told me that he earns some money through bets on football matches of the Champions League.

“Set where the high ratio. Bet on Shakhtar, rooting, bet on Liverpool. Won, pay taxes. So I was making money. By the way, Rosetau (the politician’s wife – Ed.) I met 20 years ago at the arcade,” – said Lyashko.