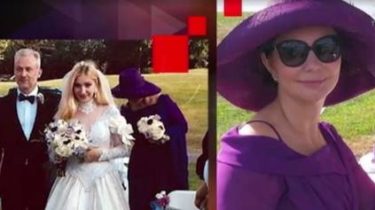 The daughter of a famous ex-Deputy from Party of Regions Elena Bondarenko moved to the USA and got married there. Exclusive photos from the wedding were shown in the plot of the program Money.

Reporters learned that the 18-year-old Pauline a year living in USA and trying to build a music career under the stage name “Lena Cooper.” She writes songs, plays guitar and piano. In August of this year, she formalized the relationship with the producer and composer Jared Dalton Kane.

The wedding ceremony was held in August in Massachusetts, the guests were invited a bit – only 30 people closest to you. Celebrated in the restaurant the Dockside Restaurant and Brunelle”s Marina with access to the longest river in New England – Connecticut. The school is a typical American restaurant with very reasonable for this countries prices – for example, lobster with pasta there costs $ 20 per serving, steamed seafood – 27. Mother of the bride personally welcomed the newlyweds.

We will remind that Elena Bondarenko is a fairly frequent guest on Russian propaganda TV channels. During the revolution of Dignity she accused the protesters of violating the law and the people’s Deputy Lesya Orobets told me that he heard from Bondarenko threats to the victims of illegal aggression of the security forces of the Ukrainians. Regionalka repeatedly spoke disparagingly about the United States and even faced with the prospect of the abolition of the entry visa to this country.