In Russia, a big bear stuck in the window of the trailer for working 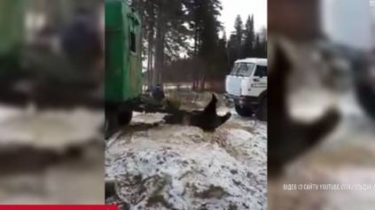 In the North of Russia in the window of the trailer for workers stuck bear. Most likely, the animal climbed up there in search of food, according to a story TSN.19:30.

To extract him, it took “KAMAZ” and the cable. Some Russian media reported that the animal was fully sedated, was freed and released, while others argue that the bear was stabbed and out of the window already pulled up the dead.

In the Carpathian mountains, a huge brown bear have opened the hunting season for village cows

The fate of the living “Winnie the Pooh” stuck in the search result Goodies, was actively discussed in social networks. Still it is not known, rescued, or killed an animal, because in the circulated video, you can see that the bear falls to the ground and not moving.