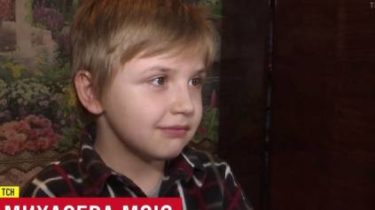 Ukrainian military Vladimir Regesa, known by the call sign “Santa”, is ready to sacrifice his order in exchange for the provision of health care 9-year-old boy from the “gray” area – the area between the positions of the APU and militants in the area ATO. His proposal was well received among volunteers and ordinary Ukrainians, who began to help a poor family from the Donbass, says the story TSN.19:30.

Tatyana Serebryanskaya, along with small children Michael and Anne, “Santa” was accidentally discovered in one of the deaf no one’s sat down and immediately asked friends volunteers support. Those did what they could, but it was not enough – without the health care professional a disease 9-year-old boy progressed rapidly. Six months later the child who brought the orthopedic shoes lost the ability to walk and now moves only in a wheelchair. So “Santa” started to sound the alarm, to give children a chance for a good future. “It was there, in that place, they have no future. That is, if a Bear six months ago, walked in, Julia he imported orthopedic shoes, now he already does not walk, he ran to the stroller… And Anka is small. What is the future of girls can be in such a place”, – says military.

The fighter decided to donate his prize for the kids. “This is not for sale, but the change is very simple. For certain conditions for them,” said “Santa”. He wants the boy helped to get rid of the hated wheelchair and he was able to walk with their feet to communicate normally with their peers and get an education.

Complications at Michael and started after a few months spent in the basement where the family was hiding from active hostilities and attacks. Doctors suspect the boy had Duchenne muscular dystrophy, however, definitive conclusions require a professional examination, which in the conditions of the special situation in the Donetsk and Luhansk is impossible. To take, free to view and make a treatment plan Michael has volunteered Lviv rehabilitation center “Dzherelo”. Deciding on the trip across the country impoverished mother with two children was very difficult because she had never before in my life did not go beyond their region. Even warm clothes and shoes she had to borrow from neighbors.

The path from the ATO zone to Lviv via Kiev family has overcome, along with TSN. And in next release you will see how people from the “gray” zone for the first time saw the capital. See more about this in TV news on “1+1” at 19:30 on Tuesday, October 31.