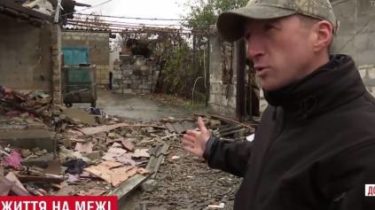 Frontline the village zaytsevo divided in half between Ukrainian troops and Pro-Russian armed groups. The head of the local civil and military administration Vladimir Veselkin took journalists on a tour and showed once an excellent place for holiday of arrays, which are now ruined by war, says the story TSN.19:30.

“Brought the wife, showed her a well, river, pheasants lived on the shore. Said, we will take no options,” recalled Veselkin the time of purchase of land for construction of own house. Now it’s broken and dangerous territory, which rarely dares to go.

Village head complains about those who go to the opposite side of the village behind the Kremlin’s humanitarian aid for the victims of the “junta”. There propagandists interviewing people who lost their homes during attacks by terrorists “DNR”, but did not specify that these people live on the territory controlled by Ukraine – and looks as if bombing civilians is Ukraine. “In the story claim that burned down, but perfectly understand from whom was burned,” says Veselkina.

On Russian television, he saw the woman Elena Goloperov the apartment is completely intact, and wealthy Deputy of the village Council Alexey Kalinin, who violently supported the “Russian world”. “Consequences: people lost their homes, wealth, property – and now stands on the other side, receives humanitarian assistance and said that he suffered the Ukrainian army”, – says the head of the village, where the occupants exterminated not even houses and entire streets.

“All burned, left what was”: the inhabitants Zaitsev told about the consequences of fire fighters

The war in Zaitseve is still going on, of the houses in the zone of direct fire people left. The military said that the recent attacks are few, but they have not disappeared. “Basically, it is a provocation,” – said the soldier with a pseudo “Boatswain”. The soldiers say that the enemy regularly arrive and grenades and large-caliber bullets. The other day a sudden shot from a grenade launcher was enough to hurt two military.