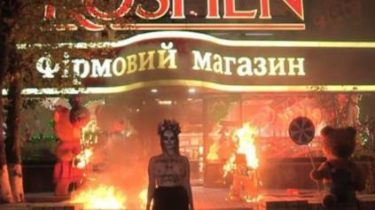 Femen activist burned Teddy bears near the Roshen brand store near the metro station “Arsenalnaya” in Kiev. Sextremists, as they call themselves, released a video of the action on its website.

Traditionally, the activist was Topless and on her head was a wreath. Unconventional was hellouinsky make-up on her face. At her breast was written in English: sweets or impeachment.

“The event is dedicated to the greed of the President of Ukraine, which even under pain of political death is not willing to part with their candy. While Vinnytsya plush family continues to accumulate for the winter subcutaneous fat, the Ukrainian people sucks bony paw” – explain the purpose of their action Femen.

We will remind, in September, Femen activist held a rally on the road in front of the checkpoint Krakovets, where waiting for the arrival of the former head of the Odessa regional state administration of Mikheil Saakashvili. The woman bared a breast and put up portraits of the President of Ukraine Petro Poroshenko and Saakashvili with the inscription on the chest “Fools without borders” (“Fools without borders”). The same slogan she began to shout.