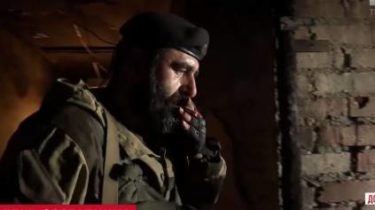 The loss of the legendary warriors of steel main theme in the conversations at the front in the area ATO. The military are discussing the death of the Amines AquaWay near Kiev, and the death of George, Saralidze near Experienced, says the story TSN.19:30.

Former fighters of dobrobat “Golden gate,” I remember when we served together with AquaWay. “It was something new women began to appear, which really wanted to fight for this country,” said a soldier with the call sign “Schultz”. He admits that the news about events in hlevakha shocked him and the brethren. “It is sad that this is happening not here, but in a peaceful area where you can’t be calm for our children”, – says the fighter.

At the front almost at the same time died perfect spy – a retired Colonel of the Georgian army with a call sign “Gyurza”. The officer once fought for Shirokino, had four injuries, even very recently gave an interview with TSN and surprised free quote Shakespeare, and here died in an ambush during a combat mission.

Meanwhile, the position of “Zenit” has not yet recovered from their losses – the other day there from a gunshot wound killed 30-year-old Alexander Zhukov. Sister describe him as a calm, authoritative, responsible fighter that seemed to have a premonition of his death. “Goodbye, said, guys, if what not so – excuse me. And went to look in the light,” says Tom, who along with the companion Alexander had first aid and conveyed him, still alive, doctors.

In the Donbass again there are deadly casualties among the Ukrainian servicemen. Chronicle of the ATO

Military emphasize that hard to survive such a loss, especially if you understand that the situation on the frontline is relatively calm. “This is a quietly considered,” they say. However, the soldiers ready to relapse just to give the enemy to break his rear and to protect your family from the horrors of war.