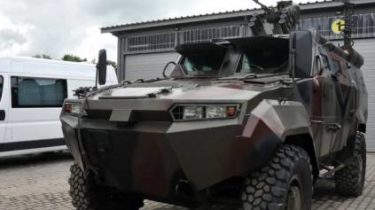 The national anti-corruption Bureau of Ukraine is investigating the purchase of the State border guard service armored vehicles “Triton” , “the Forge Plant on Rybal’s’ke” (formerly Leninskaya Kuznya), owned by the President of Ukraine Petro Poroshenko and the people’s Deputy Igor Kononenko.

This is evidenced by the decision of Solomenskiy district court of Kiev from October 18, published in the state register of court decisions, reports Liga.net.

This decision, the court granted the detectives NAB access to a number of technical and design documentation of the plant.

According to investigators, a military unit 1498 in November 2015 signed two contracts with the plant for the total amount of UAH 59.5 million. “Plant the Smithy on the Rybalsky” manufactured and handed over to the four armored vehicles “Triton”.

Decree of the Cabinet of Ministers No. 439, may 14, 2015 was provided for the purchase at the expense of budget money of the Kharkiv border detachment of the 34 units “remote combat units” the total cost of 161,5 million. Thus, the cost of one such module was to make 4,75 million UAH, actually, but one armored car was worth 14,876 million UAH, is spoken in the decision of the court.

While purchased equipment was imperfect at the time of purchase, it could not fully carry out the functions and tasks expected by the guards during her purchase. Purchased four armored vehicles in 2016, the division of the state border service for its intended purpose is not used.

The largest shareholder “Factory Forge on rybalskaya” Fund Prime assets Capital Petro Poroshenko with a package of 82.5% of the shares. Another 11.5% of the shares owned by the Fund VIC and Igor Kononenko.