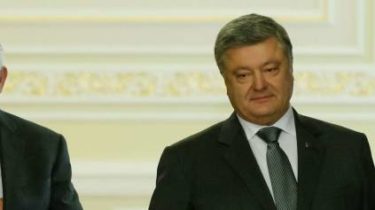 The President of Ukraine Petro Poroshenko and the Secretary of state of the United States of America, Rex Tillerson coordinated steps for the deployment of the UN peacekeeping mission in the occupied part of Donbass.

Poroshenko and Tillerson has held a phone conversation on Saturday evening, November 4th. In addition to the peacekeepers, they discussed the release of the hostages, the strategic partnership between Ukraine and the United States and the state of reforms in Ukraine.

Poroshenko noted the importance of sanctions against Russia and the leadership approaches the United States in this. In his opinion, the only way to force Moscow to return “to the mainstream of international law, respect for sovereignty and territorial integrity of States”.

Tillerson said the Ukrainian President on the appointment of Wes Mitchell, assistant Secretary of State for Europe and Eurasia. The newly appointed assistant plans in November to visit Ukraine for meetings with the Ukrainian authorities.

The two sides also expressed satisfaction with the status of implementation of the agreements reached between the presidents of Ukraine and the United States during their meeting in new York.

Recall, NATO Secretary General Jens Stoltenberg said that the Alliance supports the idea of deploying the peacekeeping mission on the entire territory of the Donbas conflict, including non-government-controlled section of the border with Russia. The requirement on the work of the UN peacekeeping mission in the entire occupied territory of the Ukrainian Donbass, in the first place on this stretch of the border with Russia, is a prerequisite of Kiev to the mission and Western partners support it.