The excitement was accompanied by a meeting of the relevant Committee of the Verkhovna Rada, which was attended by heads of Specialized anti-corruption Prosecutor’s office and the National anticorruption Bureau of Ukraine Nazar Golodnitsky and Artem Sytnik. Militiamen had to refute accusations of political bias regarding the high profile case against the son of the Minister of internal Affairs Arsen Avakov, said in the story TSN.19:30.

Fighters with corruption has assured that work under the political pressure already used. And the lack of an imprisoned big corrupt officials explain the lack of an anti-corruption court because the regular judge if the sentence against senior corrupt officials are not solved. In response to allegations of people’s Deputy Anton Gerashchenko that NABOO was buying suits and shirts from the same vendor that now appeared in the case of the purchase of backpacks, the Ministry of internal Affairs, Sytnik explained that subsequently, the press service of the Bureau was supplemented by a vivid infographics.

Videogerman, said that the NAB bought expensive clothes from the defendants in the case of expensive backpacks

It States that the defendant in a scandalous case of backpacks in the case of the NAB did not act as a representative of the supplier of backpacks, as well as a physical person-entrepreneur, and indeed offered favorable terms, due to which it won in an open and fair tender. “By results of the conducted tender the purchase price reduced compared to expected. In particular, the savings in the purchase of the shirts was 35%, tracksuits 38%. The total amount of savings amounted to about 280 thousand UAH. We emphasize that a private entrepreneur at the time of open tender for purchase (February 2017) was not a suspect in criminal proceedings NABOO, hence the conflict of interest that could affect the results of the tender or during the pre-trial investigation was not”, – reported in office. However, MP Andrew Teteruk urged the heads of anti-corruption agencies is to become the “agents of influence” agents of the law, because otherwise the charges in the service of someone’s political interests will happen in the future.

We will remind, on 31 October, the NEB had searched the apartment of the son of the interior Minister Arsen Avakov Alexander. The Bureau stressed that the action takes place in the framework of the case about the provision of the Ministry of interior backpacks. The interior Ministry in response issued a formal statement on the fact of searches Avakov Jr. Action NABOO the Ministry called political. And he Avakov is sure. which son will prove his innocence in court. On 31 October, the NEB announced suspicions Avakov Jr. and Chebotar. They are suspected in embezzlement of 14 million UAH for the purchase of backpacks for the needs of the Ministry of internal Affairs of Ukraine. The third defendant is the head of the it company Turboseo Volodymyr Lytvyn. 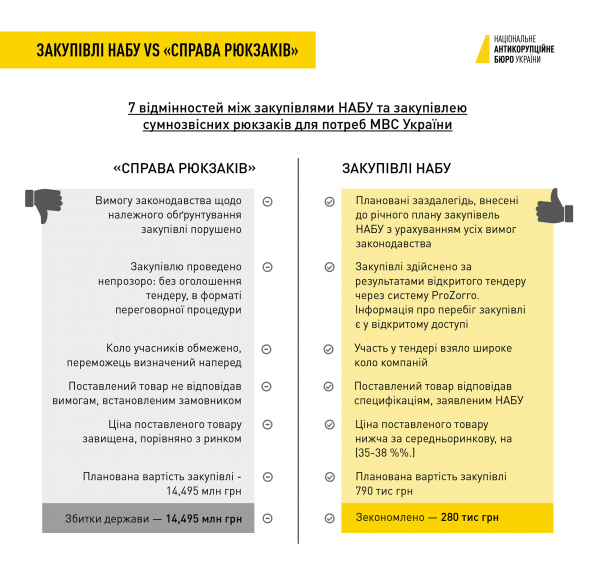