In Kiev, retired with a disability for 10 years fighting with the utilities for hot water 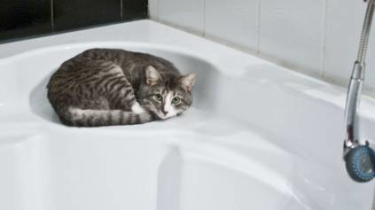 In Kiev, the retired already a few years of fighting with the utilities because of the barely warm water, which flows from the hot tap.

The situation is complicated by the fact that a year ago, 78-year-old Elena plaksiy hit by a car, left disabled. She barely survived because of his injuries, and now he uses crutches only in the apartment, not being able to go outside, especially to walk to the housing office or the “Kyivenergo”.

Heating: how not to pay for what is not

“I live on the fifth floor of Khrushchev. The Elevator’s not here. On the balcony I go out, the window look – it’s all my walks,” he told TSN.ia pensioner.

On a cold “hot” water, a woman started complaining to the housing office in 2008, when he was able to walk. She wrote to numerous public utilities statements, and in November 2014 they came to check the heat of water.

“The water was 24 degrees. After that, I generally cut off the hot tap. And called to report it to the administration office and the housing office that the tap I got hot water do not use”, – said Elena plaksiy.

Videosto of the politicians are not paying for utilities

A month later, in December 2014, the woman paid for the consumed hot water and even more – just in case.

Later, the pensioner came back to check the warmth of the water, but nothing has changed. So the woman once again wrote a statement of refusal to use hot water.

“In 2015, I wrote to the administration office a statement that I will not pay for the cold water that runs from the hot tap. Let me give hot water, check that it is really hot (not less than 52 degrees standard) and then I’ll pay,” – said Elena plaksiy.

However, the problem, the utility has not decided, but in August of 2016 of “Kyivenergo” the pensioner was a receipt for allegedly consumed hot water, which was written off a debt of almost 200 UAH. What counter in the receipt was not indicated.

The debtor number one: from Kiev owes the utility nearly half a million hryvnia

Then the woman went to “Kyivenergo”, where he registered a statement with a request to remove the fictional debt. However, her complaint went unheeded.

In October 2016 the woman had an accident and she had to fight for his life, therefore neither the strength nor the time to war with the utilities she was gone. Meanwhile, every month she continued to receive “debt” receipts in which the amount of debt has reached nearly two thousand.

After recovering from several health problems, in 2017, Elena continued her communication with the utilities.

“I started to call the “Kyivenergo” to come and look at what rate has stayed the counter to take the last paid receipt, where the overpayment was 15 cubic meters. m, took this duty. I’ve called, and they said, “Well, wait two weeks until you come.” Two weeks later, call again, and they say: “we Have not registered anywhere that you asked,” complains pensioner.

Videoke will receive subsidies in the new heating season

Meanwhile, “debt” in the receipts reached the level of 2.5 thousand UAH. In desperation, the pensioner who has lost the ability to move independently, asked friends personally apply to the “Kyivenergo”. This was done on September 29. And only a month later, on October 24, came to her mechanic who rewrote the counter.

However, the officer “Kyivenergo” asked the pensioner to show him the latest paid receipt, putting in the report that he allegedly did not provide. Unfortunately, plaxy found out this fact after the man left.

Now retired with a sinking heart, waiting for the next pay stubs, hoping that her problem will be solved at least partially. Even if the debt will take hot water anyway no one promised.

In local Zheke explained that the heating system water, which is supplied to the house of Elena plaksiy really is faulty, but the housing office is not responsible for it, as the boiler is on the balance of PJSC “Kyivenergo”.

“In connection with damage to the circulation network or the lack of pumps in the boiler – hot water circulation no. You understand that there is a ring. Until people EN masse are, for example, six in the evening, everyone opened the taps, the hot water they receive. Then all lie down to sleep and water is not used. Hot water, which has entered the pipe back to the boiler is not because the circulation line is damaged. And while the water is in the pipe, it cools. In the morning people get up, begin to use the water from the boiler receives heated water. But first it’s cold, then warmer. And the more people use, the greater the stream of water is, the warmer it becomes. Last stories have always been problematic, because while the water comes to them, until heated, you will need to drain the water cube. Of course, people don’t want to pay for it,” – said the Director of ZHEK Vladimir Surgut.

TSN.ia asked for comment to “Kyivenergo” about the situation and is awaiting a response.