In Kiev the car turned over minibus: five people were taken to hospital 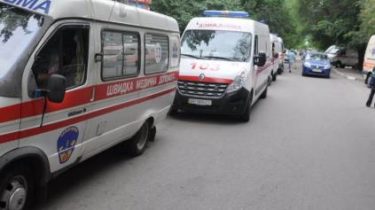 In Obolon district of the capital as a result of collision of a share taxi and a SUV injuring five people.

It is reported by the Department of communication of the police of Kiev in Facebook.

”Previously it is established that the driver of the bus, moving in the direction of Heroes of the Dnieper, broke the rules of the road, made a u-turn at an undisclosed location, with the result that the car ”Volvo XC 90” struck a minivan in the right direction. As a result, the bus overturned on its left side. Five passengers minibus got injuries (pre – light), they were hospitalized”, – is spoken in the message.

It is noted that the issue of opening of criminal proceedings on this fact.

”The event has been duly registered in the Magazine of the uniform accounting of statements and messages of the Obolonsky police Department. The issue concerning the opening of criminal proceedings, which will establish the circumstances and mechanism of the accident”, – added in Department of communication.

Videological of the bus, who is suspected of hitting a pedestrian, declared measure

We will remind, earlier in Kiev on the street Heroes of Dnepr near public transport accident involving a minibus №464. The stop came the bus, which stopped in the second row for the disembarkation of passengers, it has already started to go, when at that moment the bus went to the first row and hit two people.

Later the police said details of the accident: as a result of collision of a minibus in Obolon in Kiev killed wife: locals 1952 and 1953 year of birth. The woman from the received traumas has died on the spot, and the man in the carriage on the way to the hospital.

Yesterday, November 6, the Shevchenkivskiy district court of Kyiv ruled to detain the driver of a minibuswho hit and killed two people in Obolon. The man was arrested for two months.