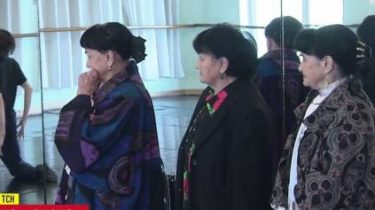 Legends of the Ukrainian ballet trio of Potapovich preparing for the celebration of the anniversary of national Opera. Party in the performance of Elena, Anna and Barbara and still set an example for young dancers, and their name is called competitions in Japan, says the story TSN.19:30.

A hundred dance parties on three, they became Tutors, and now tonics theater are their pupils. The scene they gave 60 years of his life, and had to speak to the first persons of the state since the time of Stalin. One of the sisters still works during performances, although it remains behind the scenes – her responsibility is to do a change of scenery, working the curtain, to give calls.

Sisters – the living exhibits for the younger generation of visitors to the theatre, looking at them with the same astonishment and box, where Stolypin was shot. Today it is the center of the capital, but 150 years ago the city built a theatre there, where he used to feed pigs and cows. The first building burned in 1896, and after that the theatre was built the way it is today – with a parterre, amphitheater, dress circle and four tiers of 1650 spectators. Thereafter, the future national Opera changed only the names, but inside and outside keeping it unchanged for over a hundred years. Even in the details – relief and bright tiles was due to the fact that specially for this order Kharkov factory restored the old production technology to create an exact copy of the ancient floor.

Kiev is preparing a premiere of the ballet “For two hares”

Velvet armchair with the shiny armrests again for the audience. On Wednesday, the theater will join in the anniversary performance the best moments from various performances. It will come and sister Potapova that for three given stage 150, and all 200 years.