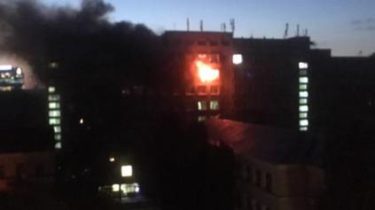 The perpetrators of the fire at the National University of food technologies, located in the center of Kiev on Vladimirskaya street, faces up to eight years behind bars.

About this TSN.news Agency reported in a press-service of the Channel in Kiev.

Criminal proceedings is being investigated under part 2 of article 270 of the criminal code. According to her, the violation of fire safety requirements, which caused the fire and death of people, is punishable by imprisonment for a term of three to eight years.

Senior investigator Holosiivskyi control of national police Temchenko V. V., leading the case, also confirmed that during a fire killed 46-year-old head of the laboratory of storage and processing of grain Larissa Jagarna.

Recall that the fire occurred on the evening of 27 September, on the 8th floor of a University building near the chemistry lab. This caused the spread of rumors about chemical contamination of the premises, in particular, vapors of mercury. This information is not yet confirmed. October 13, TSN.ia have sent a request to the SSES, but not yet received a response.