Vandals who desecrated the Eternal flame in Kiev, could be sentenced to 7 years in prison 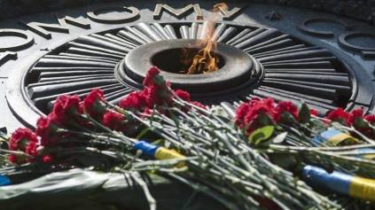 The militiamen all circumstances of damage to the Eternal flame in the Park of Eternal Glory in Kyiv.

About it reports a press-service GUNP Kiev on his page in Facebook.

Broken plates and scattered flowers: there are photos roscolotenco in Kiev of the memorial Heavenly Hundreds

It is noted that information about the incident police have received about 7 o’clock in the morning. It turned out that at night unknown persons pelted the Eternal flame with gravel and sand.

In particular, at the scene found a total of 8 buckets, in which the unknowns are brought to the cement. Also found three pair of construction gloves and buckets.

Because of the incident the law enforcement authorities opened criminal proceedings on the fact of abuse of the monument. The culprits face up to seven years of imprisonment. Now the police checks the CCTV footage.

In turn, the TSN story says that to clean out the Eternal flame from the concrete had gas. During the work it became clear that the solution is not thick, and vandals poured buckets, not eight, and about two. So for two hours all the burners of the monument managed to clean and light the eternal flame again.

Police are examining video from surveillance cameras and looking for those who had repaid. Law enforcement agencies suggest that the likely vandals “dedicated” such actions until the day of liberation of Kiev, which was the day before, or before today’s 100th anniversary of the October revolution.

Earlier it was reported that in the night of Tuesday, November 7, in Kyiv, unknown persons poured cement of the Eternal flame at the Tomb of the Unknown soldier.