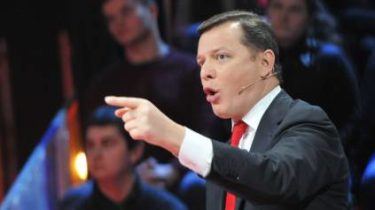 The leader of Radical party Oleg Lyashko urged his fellow party member Igor Popov to lay down the mandate of a Deputy in connection with the scandal, which turned out to be his son.

About this Lyashko wrote on his page in Facebook.

“I sincerely sympathize with my colleague, Igor Popov, but in the situation, I think that he should lay down his parliamentary mandate, which he received on the list of the Radical party”, – said the leader of the radicals.

The glorification of Nazism and the war against the government. The Network found likely the son of MP Popova

Lyashko believes that Popov need to educate his son, “so that it no longer caused any grief to the parents, nor the people.”

“I’m waiting for Igor the courage to take any, but politically responsible decision before your family, team and society,” wrote the leader of the radicals.

Igor Popov so far has not responded to this appeal.

Popov, the son of the robber: I have only swearing is, when I think about his motives

We will remind, earlier it was reported that 14-year-old son of the Deputy from “Radical party of Oleh Liashko” Igor Popov attacked a shop in the Obolon district of Kiev. The police opened criminal proceedings under article “robbery”. And as early as 27 November, the young offender and his companion reported about suspicion.