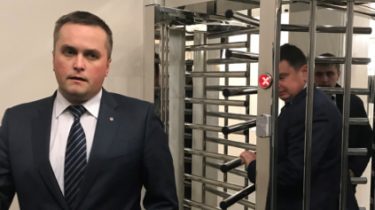 This was after a meeting with the attorney-General said the head of the NABOO Sytnyk.

According to him, the operation against members of the GMS lasted from the spring of 2017. “A lot of investigative actions have been documented, but yesterday everything stopped. The attorney General said that the detainees are not in custody. To ensure that the investigation took place objectively – we can’t give more information,” he said.

According to him, the actions of the defendants in the case have been documented, but until the investigation will be conducted. “The operation is, unfortunately, suspended. All of the collected facts we will give the rating”, – said the head of the Bureau.

Sytnik added that the arrest of the detectives NAB SBU according to the relevant sanctions of the GPU associated with the lack of information. “We exchanged information. People had only the statement of one of the official GMS. The attorney General also was not at all aware”, he said.

In turn, the head of the Specialized anti-corruption prosecutors Nazar Golodnitsky refused to announce any details of the events on 29 November, citing the secrecy of the investigation.