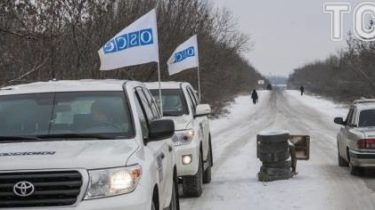 In the OSCE declared that kopiranje of the observer Mission before the militants “LC” during the transfer of bodies of the Ukrainian military is “an involuntary gesture.”

This is stated in the clarification published by the SMM OSCE on the page in Facebook, “in response to misinterpretation of results.”

“The person that greets the observer SMM, is a member of the organization, which is engaged in the exhumation, transfer of bodies and the exchange of prisoners/detainees. The observer Mission has partnered with this person and the organization in 2015 to detained combatants can return home or to a grieving family could at least partially come to terms with the loss of a loved one”, – stated in the message.

The OSCE said that on the “errors made by an observer” is an inside job with the aim of preventing its recurrence.

“It is a pity that all the attention was focused on this mechanical gesture. It’s an involuntary gesture, common to many who have previously served in the armed forces; it is in any case not evidence of approval, or even a commitment to any position or point of view. And, of course, it should not divert attention from the important work being done by the observer and his colleagues”, – concluded the Mission.

We will remind, earlier in a Network there was a scandal because of the fact that on 25 November a Russian observer of the Special monitoring mission (SMM) of the OSCE saluted the militants “LC” during the transfer of the bodies of those killed in the Donbass soldiers of the Armed forces of Ukraine.

There is another camera angle of the situation, showing the @OSCE_SMM monitor saluting to the pro-Russian militant with 3 Ukrainian soldiers slain just two meters away.
Still no comment on the odd – to say the least – behaviour … pic.twitter.com/u3LfsIYDzb