Near the building of the interior Ministry, police violently broke up a peaceful rally on the anniversary of the events on the Maidan 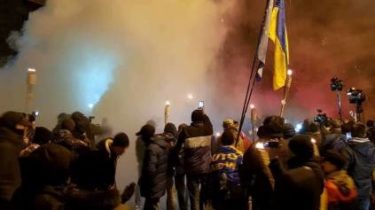 In this moment near the building of the Ministry of internal Affairs of Ukraine in Kiev held a dispersal of the peaceful rally for the fourth anniversary of the dispersal of students during Euromaidan.

To the interior Ministry building was approached by about 200 participants. They were attacked by the police cordon guarding the building. There is information about the beating. On a place of incident drove paddy wagons. About it from a place of events the correspondent of TSN Ivan Grebenyuk.

Recall, people first gathered in Independence square. From there they marched to the presidential Administration. There demanded the authorities to investigate the crimes of the Maidan, because almost none of them punished. Earlier in the Prosecutor General’s office reported that a prisoner only has one aunt.

The power of the activists are not heard – because it was not allowed law enforcement officers. For action monitor national guardsmen, members of riot police, patrol. Clashes between protesters and police near the presidential Administration was not only a verbal altercation.

Then the protesters went in convoy to the building of the interior Ministry, where clashes broke out.

At 21:00 scheduled event near the stele of Independence on the Maidan in Kiev. There will be to remember the events of 4 years ago.