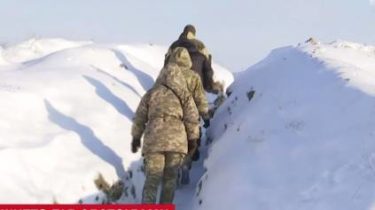 The occupiers are trying to regain lost, so began shelling Travneve and Gladosovo, which the soldiers of the 54th brigade, together with soldiers of the battalion “Aydar” released by militants last week. From-for military operations in the liberated village can’t get out repairmen to fix the electricity, gas and water to the villagers, said the plot TSN.19:30.

“Restless night, the morning the enemy shelled these settlements from 82-mm mortars, infantry fighting vehicles. The enemy does not cease fire” – said the head of the press center of the operational-tactical group “Lugansk” Svetlana Borisova. The militants were active throughout the arc Svetlodarsk, because of the lost village burned them. The military say that the enemy has seldom, but precisely, including the 120 mi mines.

In an open attack of the enemy go is not solved, so cunning, making the saps, tunnels and settles closer to the Ukrainian positions and machine gun nests. The soldiers of the 54th brigade for maneuvers with the Russians and local separatists while watching and not bothering to do a tunnel. Military laugh when militants undermine quite close, according to their own standards, the army will go to visit them – until debaltseve. Because even under the Minsk agreements is Ukrainian city.

As reported in the headquarters of the 54th brigade told about the thwarted plan for the return of a large piece of occupied territory with the alignment of the front line and access to the outskirts of Gorlovka. It was not implemented due to chatter one of the volunteers. “To be honest, the result was planned to be much larger. Planned to capture a much larger area, but these plans became public,” – said one of the officers of the brigade. In the beginning of the operation, one of the volunteers published intentions troops in the Internet and terrorists “DNR” promptly brought up the reserves, so a little blood the operation could not be implemented, and large-scale battles and bloodshed, the army had no intentions. Now the military on the arc Svetlodarsk sigh, that with such friends to the enemy intelligence do not need.