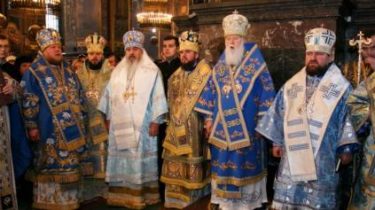 It is reported jellyfish with a link to the website of the Moscow Patriarchate.

In the letter, Filaret was allegedly asked about “the recovery of Eucharistic and prayerful communion” and the abolition of “all decisions, including the banning and separation”.

“The letter ends with the words: “I’m sorry all that have sinned in word, deed, and all my senses, and from the heart sincerely forgive all”,” — said the ROC.

The UOC-KP, such a statement categorically denying that. Press Secretary of the Kyiv Patriarchate Archbishop yevstratii said that “never Patriarch Filaret any letters, representations or appeals with similar content is not sent, does not send and send will not.”

According to him, the statement about the letter, Filaret, “provocative information, which is not true.”

Note that in the Verkhovna Rada is a few so-called Church projects. Bill No. 4511 “On the special status of religious organizations, senior centers are in the state, recognized by the Verkhovna Rada as the country-aggressor” may only the Church with its center in Russia. If the Council of bishops has transferred control of the UOC-MP in Kyiv, the impact of the law on religious organization is in question. The Parliament had to vote him in the spring of 2017, but the law was removed from the agenda because of the reluctance of MPs to interfere in the Affairs of the Church.