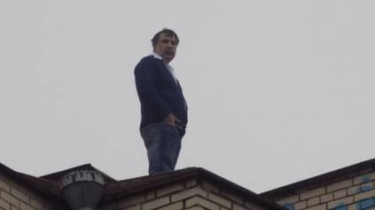 Security forces raided the apartment of the ex-head of the Odessa regional state administration. Saakashvili himself after the visit of the SBU climbed to the roof, where they tried to communicate with people under the building that came to support the detainees.

On his page in Facebook user Vladislav Kutsenko published a video which shows how Saakashvili is removed from the roof of the house. It took at least 8 people.

Earlier, on 5 December morning colleagues, Saakashvili stated that the policy in the apartment unknown knocked the door. Later it became known that eks-the head of Odessa region climbed onto the roof of the house, where she lives. There he was hiding from security forces. Also there was information that Saakashvili threatened to jump off the roof if he was approached by law enforcement agencies.

Supporters of the policy have blocked the road and began to erect barricades on the street three saints.