“We have not figured out”: the inhabitants of the liberated villages of Donbass refuse to talk about the change of power 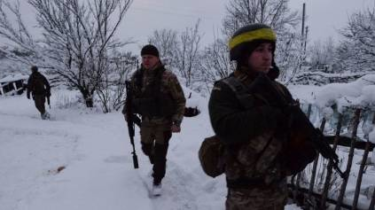 The soldiers of the 54th brigade celebrated the third anniversary of its fighting formation of liberation Travneve and Gladosovo. Local residents are not protesting, but not everybody is happy with the change, because waiting for further development of their lives, according to a story TSN.19:30.

About life under the rule of “DNR” local talk reluctantly. The Ukrainian military alone hug and kiss, others glancing warily. Terrorists almost nobody scolds, because they did the main thing – pay, though small, pension. Now people are waiting for whether to do the same Ukraine. Pensioner Alexander Dudnik still have not decided yet what it power, because a sister of Gorlovka scared him that now he will not receive a pension at all. “I heard a trouble that will not when these to. If those were 2730 rubles,” – he said.

The inhabitant of Lugansk openly admits that a year ago received two pensions from Ukraine in hryvnias and Russian rubles. And now it is heavy on ruble pension. “A pension in Ukraine was received for a year are not getting. So on this one retirement – 2700! Prices, as in Russia, in Moscow. So a good life there,” she says.

To return to the Ukraine military mental trying – they collected some food, clothing, and hand out local. My grandmother, who looked from behind a fence, go out, begin to communicate, the majority asks them not to shoot, because on the other side of the demarcation line were relatives, they worry about them. “Live one day. What will be tomorrow? The decor is not very” – are recognized as they. Where they better not say because they are afraid and do not understand how long come Ukrainian army for a long time. “We have not figured out” – diplomatic speak local.