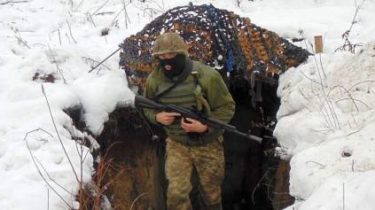 Members of the Armed forces of Ukraine recorded the use of militants in ARDLA prohibited from phosphate mines on the positions of Ukrainian armed forces near Novoselovka.

“With 18 minutes, which flew by our position, one was phosphorus. Even after three days it continued to burn. Fortunately, the terrorists did not get into the dugout and all were alive and healthy. Otherwise would it matter, phosphate mine cannot be extinguished,” – said one of the soldiers on the base under the Novoselovka.

It is reported that in place of breaking mine arrived experts of the monitoring bodies, which conducted a survey of fragments of the munition. They confirmed that the Ukrainian military really used phosphate mine.

Thus ORDA the terrorists once again violated the Minsk agreement regarding the prohibition of the use of certain weapons.

We will remind, in comparison with the last days the militants have reduced the intensity of shelling in the Donbass. This is stated in the message press center ATO.