Natspolitsiya has been instructed to search Saakashvili 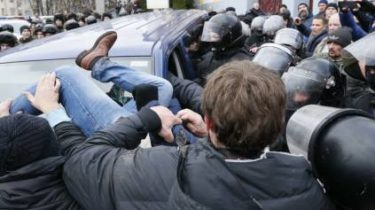 The national police of Ukraine has instructed the Prosecutor General’s office about the search policy of Mikheil Saakashvili. This is the official Twitter of the police.

“Netpolicy received the order of the GPU on the wanted list of Saakashvili. Implementation of search is entrusted to the National police and the security Service of Ukraine”, – stated in the message.

To Nacpac received the order of the GPU on the wanted list by N. Saakashvili

Implementation of search is entrusted to the National police and the security Service of Ukraine#police #news #search #SBU pic.twitter.com/rc9UUs9Ki6

Earlier it was reported that Prosecutor General Yury Lutsenko urged the ex-President of Georgia Mikheil Saakashvili to come to the investigators within 24 hours. “After 24 hours, the entire law enforcement system of Ukraine will do everything necessary to stateless Mikheil Saakashvili, who, obviously, financial transactions associated with the oligarchs, including from Moscow, appeared before the investigator for the presentation of suspicions, and then before the court, where prosecutors will seek him house arrest. After today’s escape – this measure becomes questioned,” – said Lutsenko. “I call on Saakashvili to exercise at least once male masculinity and responsibility for their words, stop the lies, the mudslinging and come to the investigator of Ukraine to obtain legal way procedural documents”, – said the head of the Prosecutor General.