SBU and the Prosecutor General vs Saakashvili: chronicle of a failed detention 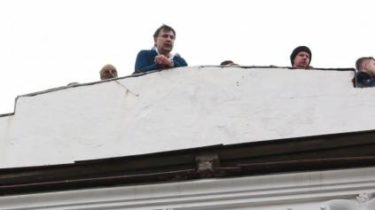 Flop was the operation of the security forces to arrest Mikheil Saakashvili in Kiev. Law enforcement officers came to his apartment in the city center at 7:00 o’clock in the morning, says the story TSN.19:30.

To the house near the Independence square, except for employees of GPU and SBU, ambulances and firefighters. Saakashvili climbed onto the roof and threatened to jump, while his supporters stormed the door to the entrance to come to the leader for help. In the end, the security officials returned the fugitive to the room, and a crowd of supporters of the policy from the yard went to the street where already gathered dozens of police officers. Soon clashes began at the bottom, I was again able to escape to the roof.

Videoservice GPU and SBU are unable to detain Saakashvili

Protesters blocked a bus of militiamen, whom they wanted to remove Saakashvili. Prosecutor General Yury Lutsenko held a briefing and stated that the policy declared suspicion in assistance to participants of “criminal gangs and hiding their activities.” And all the shares, held by Saakashvili and his associates, was funded by the environment Yanukovych , in particular, olahraga Kurchenko, who is now hiding from the Ukrainian investigation in Russia. Lutsenko announced the recording of a conversation with voices similar to Saakashvili and Kurchenko. The attorney General believes that Kurchenko agreed to Fund the enforcement of the ex-head of Odessa region to the authorities in exchange for a future return of assets in Ukraine. An agreement was reached, the Trustees of Kurchenko and Saakashvili, the latter was represented by Severin Dangadze, who was detained while trying to escape from the Ukraine. “Together with him was arrested a bag with documents, which clearly showed where the money was spent Kurchenko – bus, TV, food, bribing various individuals, including journalists”, – said the head of the GPU.

During the searches in the apartment Dangadze and found a Ukrainian passport Saakashvili, although earlier the politician said that the document is from the President. Lutsenko assures that Saakashvili will be interrogated and will elect a measure of restraint, and extradited to Georgia, where policy also opened several criminal cases, is not going to. However, to detain former head of the Odessa region did not work – the machine SBU drove a hundred meters, as it was blocked, and then together with the riots and barricades of paving stones released Saakashvili out of the car through the broken window. The politician immediately offers to transfer the action under walls of the Verkhovna Rada. Barricades at three saints quickly dismantled, and the paving was folding back the national guard.