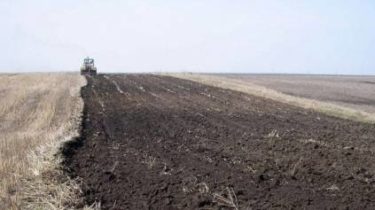 One hectare of land of agricultural purpose in case of cancellation of the moratorium on its sale can cost 50-60 thousand UAH.

This was stated by first Deputy Minister of agrarian policy and food of Ukraine Maxim Martyniuk, reports “New time”.

“Shadow land market will continue to exist, is to act a moratorium on its sale. If the market starts, the cost per ha ranged from 50 to 60 thousand hryvnias”, – he said.

The moratorium on selling agricultural land will act while in Ukraine will not accept the law about turnover of agricultural land. Now in the land inventory made 70% of all plots, Gosgeokadastr fully ensures the process of transferring leases.

Prime Minister Volodymyr Groysman advocates against the sale of land to agricultural holdings and foreigners.

“It is possible to prevent the turnover of land among farmers-Ukrainians – individuals in those volumes which are necessary for the creation of agricultural enterprises”, – said the head of government.

Recall that the moratorium on sale of agricultural land MPs propose to extend for another year – until January 1, 2019.

Earlier it was reported that the President Petro Poroshenko gave the year for the creation of e-cadastre for the launch of the land reform.