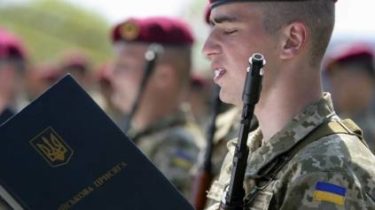 In Kiev soldiers of the national guard were flat on the outskirts of the capital instead of apartments in Pechersk, a cost of 100 million hryvnia less.

This is stated in the investigation Maksym Opanasenko for the program “Our money with Denys Bigus”.

According to journalists, in the 2000s, the National guard handed over nearly a hectare of land at the cave on the territory of military unit 2260 in the street Yevhen Konovalets, 34 for construction of residential houses residential complex “Aristocrat”, which, according to the agreement, the military was to receive 20% of finished apartments and a portion of Parking spaces. In particular, the developer has committed to provide 50 apartments with an area of over 4,000 square feet and 30 Parking spaces.

But in the fall of 2016, when the construction company “ukrbud development” has finished building a house, commander of the National guard Yuriy Alleru signed an additional agreement under which the national guard instead of the real estate in Pechersk get 65 apartments in the residential complex “Talisman” on the outskirts of town in an industrial area near the metro station “Red farm”.

It is also noted that now a square meter in the residential complex “Aristocrat” is at least 43 500 hryvnia, and the cost of Parking spaces is at least 650 000, thus the total cost of the flats was to get the National guard is more than 200 million hryvnia. But a square meter in the residential complex “Talisman” at the time of signing an agreement to exchange cost 16 500 hryvnia, so the total cost of 65 units received the National guard is less than 100 million.

At the same time, according to expert assessment of the entrepreneur Alice Grinchuk exchange is recognized as beneficial to the National guard, because apartments are on the outskirts, allegedly were more expensive apartments in the city center.

According to “Our money” vs hrynchuk now opened two criminal proceedings, both on the deliberate understating of cost of objects of evaluation.

In turn, responsible for the quartering of troops NSU Colonel Alexander Yarosh explained that the exchange of residential complexes is conducted in connection with the fact that I wanted to get a property in an object that has already been commissioned, and not that it is completed.

“In particular, and the fact that the apartments that we had that were designed to Yevhen Konovalets, had a very large area, they were designed for implementation,” he said, adding that the third reason was a Parking lot that the National guard has no right to provide the military.

Conductive ridiculous talk. Not about Saakashvili. In short, right at the cave part of the military guard gave the developer hectare…

Published by Denis Bigus on December 6, 2017

In addition, the reporters found that several months after housing exchange Allegrova daughter Yekaterina Pustynnikova became the owner of the SUV Grand Cherokee 2015 release, which is about 1.5 million, and also issued his apartment in a new building LCD “Mykilska Sloboda” about the same cost. Alleru assured that his daughter worked for a pharmaceutical company and earned $ 2,000 per month.