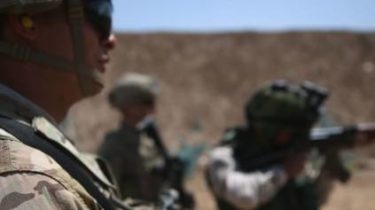 Providing Ukraine with lethal weapons should be an effective response to the growing threat from the Russian Federation.

This is stated in the statement of the MFA of Ukraine on the occasion of the anniversary of the signing of the Budapest Memorandum on security assurances in connection with Ukraine’s accession to the Treaty on the nonproliferation of nuclear weapons.

The Budapest Memorandum of 5 December 1994 was signed by the UK, USA and Russia.

“In terms of the collapse of the USSR and global threats to security and non-proliferation regime associated with the significant nuclear capability of the Soviet Union, Ukraine has made a unique contribution to global nuclear disarmament and stability,” reads the statement of Ukrainian foreign Ministry.

Diplomats have said that Russia’s armed aggression against Ukraine is a flagrant violation of international law and the provisions of the Budapest Memorandum.

“In connection with refusal of Ukraine of nuclear weapons, article 2 Russia pledged to refrain from the threat or use of force against the territorial integrity or political independence of Ukraine, and provided the international legal obligations that any of its weapons will ever be used against Ukraine”, – said the Minister.

The current behavior of Russia as a nuclear state poses a threat to the nuclear non-proliferation regime as a whole, which is particularly acute in terms of nuclear blackmail and provocations by the DPRK.

“Providing Ukraine with nuclear-weapon States security assurances by signing a relevant international legal instrument, which became the Budapest Memorandum, was a condition, for which the Ukrainian Parliament agreed to the accession of Ukraine to the Treaty on the nonproliferation of nuclear weapons of 1 July 1968. Ukraine has considered and continues to consider these guarantees as a circumstance that constituted a substantial basis for Ukraine’s accession to the said Treaty,” the statement reads.

Videoviagra assistance: the government of Lithuania will give Ukraine the weapons to two million euros

Said that Ukraine highly appreciates the actions of the US, the UK and France that actually confirmed support for the territorial integrity and sovereignty of Ukraine, condemn the illegal actions of the Russian side and take action in response to the aggression of Russia against Ukraine.

“We are confident that the strengthening of political support and practical assistance for strengthening the defense of Ukraine by providing lethal weapons should be an effective response to a growing security threat from the Russian Federation. This will show the full commitment of States signatories of the Budapest Memorandum commitments and to strengthen the architecture of European security, an essential element of which is the Memorandum”, – emphasized the diplomat.

”Ukraine continues to view the Budapest Memorandum as an important international political and legal tool to ensure Ukraine’s security from the United States, Britain, and France and China and calls on Russia to fully comply with the obligations”, – summarized in the statement.

We will remind that in November of 2017 , the U.S. Senate approved the budget with the possibility of providing lethal weapons to Ukraine.

According to the Ambassador of Ukraine to the United States Valeriy Chaly, the President of the United States Donald trump needs to sign zakonoproekt about granting to Ukraine of 50 million dollars for lethal weapons before the end of the year.