The scandal with the NAB and anti-corruption court. “Popular front” decided, what laws to vote 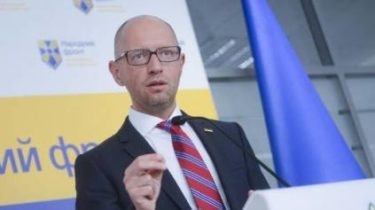 The party “national front” have determined what laws to vote for the people’s deputies from its parliamentary faction.

“The recent crisis and the situation around the law enforcement bodies were discussed at the political Council of the party. From every crisis we must find a way out. The decision was made. In order for the anti-corruption struggle into the political struggle and persecution, there is a single formula. First – the urgent adoption of the law on the anti-corruption court”, – wrote in Facebook the leader of the party Arseniy Yatsenyuk.

Another solution, for which they promise to vote neodnorodnosti about “appointing independent and professional auditor of the National anti-corruption Bureau, with international experience and which has broad support in international circles. “Popular front” will offer such as Robert Storch or other internationally recognized experts”.

The third law on privatization, which will help to eliminate causes of corruption, says Yatsenyuk.

“Fourth – the compliance with the Constitution of Ukraine the legal situation of all the heads of law enforcement agencies and the establishment of parliamentary control over the activities of these bodies,” – said the politician.

Earlier it was reported that the Parliament has already registered a bill according to which MPs will be able to Express no confidence in the heads of security and anti-corruption structures.