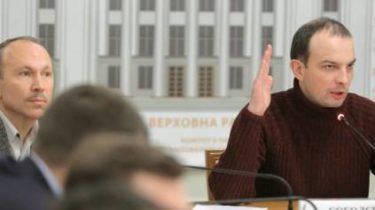 Anti-corruption Committee of the Verkhovna Rada after the dismissal of the Chairman Yegor Sobolev in General can remain without a leader.

This opinion was expressed by Sobolev on air of the talk show “Right to Vlad,” on the channel “1+1”.

Videointernational the Committee may remain without the head – Sobolev

“My dismissal was personally involved in Petro Poroshenko “Petro Poroshenko’s Block” and Arseniy Yatseniuk “popular front”. Who they designed for me, honestly, I know much worse than they are. I think it may be that the Committee will generally be without a Chairman,” he said.

Sobolev added that the anti-corruption Committee under his leadership stopped 383 of the bill, where it was found the risk of corruption, and none of these bills has been enacted.

“I’m afraid that the President and the corrupt most beneficial to the Committee and has not earned more,” he said.